In today’s article we’re going to teach you how to hack Instagram account using an old method of hacking called brute-force.

Before proceeding to the tutorial, we must add the following disclaimer and terms of this article you’re agreeing with if you decided to use the method below. Because the information contained here can be used in wrong activities we don’t don’t want you to do, like stealing other people’ accounts, as it’s strictly against the low.

Disclaimer and Terms of this post:
After reading and learning the method, you’re allowed to use it in aim just to recover back your lost, forgotten or hacked password of your own Instagram account. Any other goal of using this information will be considered against the rules and we “Kuaza” team will not be responsible for stated usage of our shared information.

Now we can continue with the tutorial. 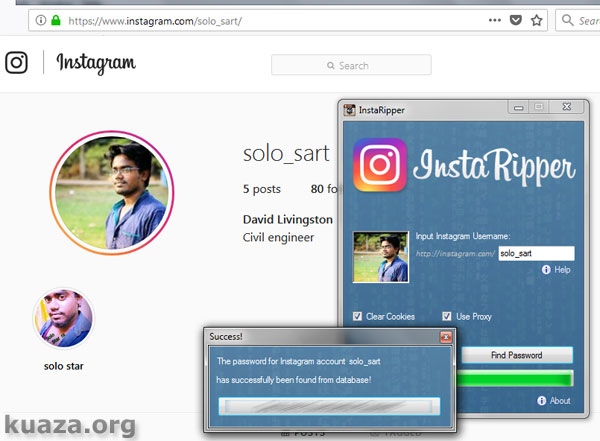 If you still don’t know, a brute-force method is an action which requires special developed cracking application in goal to find correct password of entered account.
A program usually uses a pre-made .txt document which user have to browse into an app which contains a list of thousands of all possible combinations of words of which can password be made of.
These list of passwords can be manually written or bought from various places on internet, usually at hacking related forums sections or at dark web.

In this case, the InstaRipper app has a password list built inside itself which automatically updates itself with new words combinations every time a new update of app comes. So users don’t have to bother about this job when it comes to hacking IG accounts.

Another great features of this app is its user hiding features which makes app’s internet connection spoofed. Means if third party devices, like ISP technicians wants to find from what location a hacker is performing his action, the InstaRipper application will show a fake IP address to hide its real admin’s location. This is also controlled by the app’s new updates which are coming approximately at least once per week, to supply the tool with fresh new proxies every time the program updates itself.
The second similar “hiding” option is to give an user opportunity to clear cookies from their default browser after the InstaRipper is done with its hacking operation. This is done automatically by InstaRipper. Because it uses default browser’s features running in a background for its internet connection operations. Its activity can be compared to a parasite because it doesn’t have its own browser built inside so it can contain less possible data to help user make it easily portable software as possible.

A password cracking time depends of several things here:
– CPU power of a device on which the InstaRipper tool is running.
– An internet speed.
– Strength of password. Means if it’s made of only letters it’s considered an easy on and can be break in only like two minutes. Stronger ones however take some more time, depends of how many characters are made, and variety of characters too. For example a very strong password which is made of numbers + letters + special characters like %&#$ and so are very hard to break and a process can sometimes take for whole day and even longer.
This is why it’s recommended to have very strong CPU on your computer which will provide much faster time of revealing desirable password.

Well I think we covered all important things regarding this topic today.
You can download the InstaRipper tool from its official website linked up at beginning of this article; Instaripper.com.

Hope you enjoy the reading!
Until next time, kind regards.